Chania can be easily reached either by airplane (Chania International Airport "Ioannis Daskalogiannis"; IATA: CHQ) or by ferry boat from Pireaus (Souda Bay).

Travellers should be aware that the airport located in the other major city of Crete (Heraklion International Airport, "Nikos Kazantzakis"; IATA: HER) is 140 km away from the city of Chania (approx. two-hours drive away). 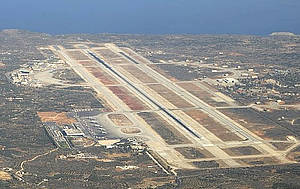 The Chania International Airport, "Ioannis Daskalogiannis" (IATA: CHQ), is an international airport, located near Souda Bay on the peninsula of Akrotiri, 15 km from the city of Chania.

The airport hosts domestic flights to and from Athens and Thessaloniki (operated by Aegean Airlines, Olympic Air and Ryan Air).

The map of direct scheduled flights between European destinations and the airport of Athens can be found here.

During high season (April to early November) there are also many charter flights from across Europe in addition to the low cost airlines RYANAIR & EasyJet.

From Chania airport you can reach the city of Chania either by bus or taxi.

The bus schedule is available here. From the bus station other busses for Platanias & Agia Marina areas are available.

The taxi stand is located just outside the passenger terminal and taxis are available 24 hours a day. Indicative taxi rates from the airport to the city center can be found here.

For those wishing to visit Greece and, by extension, the Schengen Area, a visa may be required depending the country of origin. The list of countries requiring or not a visa can be at the web site of the Hellenic Republic Ministry of Foreign Affairs.

The Conference Secretariat of EBC-VI will be happy to issue a letter of invitation to participants wishing to apply for a visa.